Words of Affirmation: I need to hear it

Words of Affirmation: I Need to Hear It

There are  five languages of love that were made popular by author, Gary Chapman in 1992. The other four languages are touch, acts of service, quality time and gifts. I am not convinced these are the only languages of love (which I write about here,) but they are a helpful place to start). 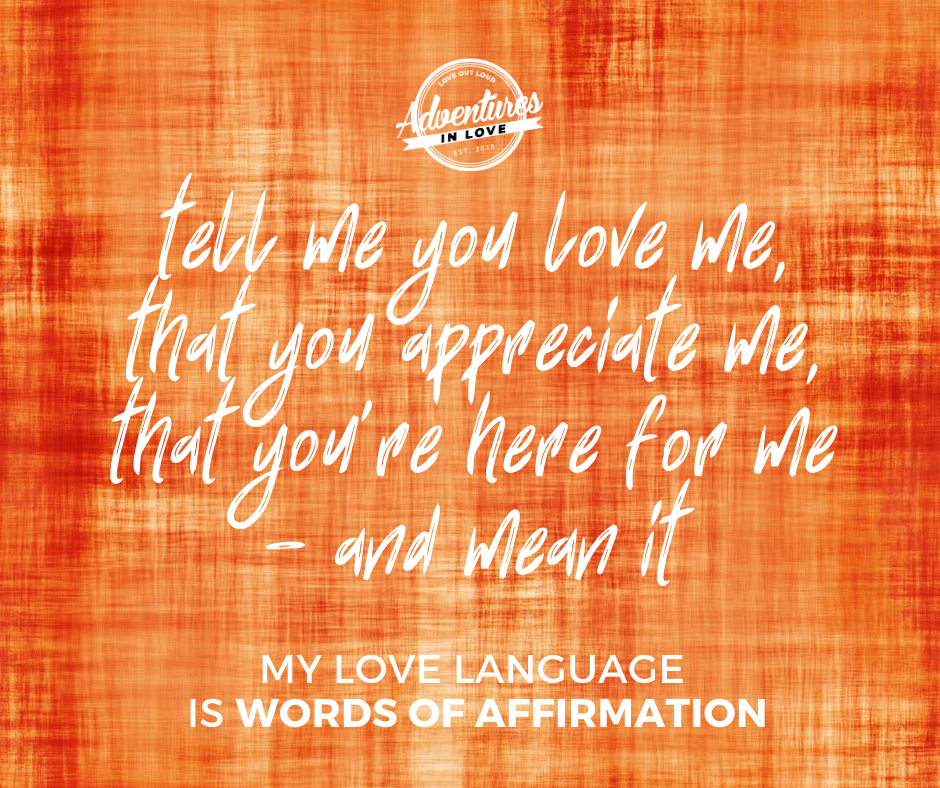 I was reminded of the power love languages during my last session of the day.  I had seen this couple many times before.  They are interesting people with unique and independent personalities; both are quite smart, well educated, and equally very likable.  They are funny too.

He likes to be right. He is usually clear about his frustrations and what he would like to see different in their home and in their relationship. I could always tell from his curiosity about how she feels, his laughter at her jokes, and his soft eyes when he looks at her that he also admires her.  As you’ll see though, I don’t think she could always tell.

She wants to get things right, to make him happy.  It has always been obvious to me that they feel great love and friendship for each other, too, but it was never evident through his words.  His words were used to process what wasn’t working and what needed more attention.

She started with, “I worry that my anxiety is hard on you and the kids.”  With genuine concern, she continued, “I know you don’t like that part of me and I wish I could compartmentalize it so it doesn’t affect you.”  He listened to her with his usual soft eyes and open heart as she struggled to share her feelings.  When she finished, he repeated what she said so he could be sure he understood her.  As he did so, his eyes began to water.

While visibly working to hold back tears, he said, “Yes, anxiety is a part of what you bring to our family, just as you bring love, thoughtfulness, humor, helpfulness and much more.”  Then the first teardrop found its way out of the corner of his right eye, and he continued, “I can not wish for some parts of you and reject the others; you are all of it, it is what makes you you, and I love you.”

He was done talking. He just shared genuine words of affirmation and vulnerability filled the air.

I could tell he felt like he had said more than he was accustomed to sharing already.  So, I did what any good therapist does, and asked him to share more.  When I invited him to explain what he felt as he told her that, he gave up the battle to hold back his tears (and no, this is NOT the goal of therapy – to make people cry – so stay with me here as the magic unfolds).  He said, “It makes me sad to think that you feel alone with your anxiety.  That you believe I may not love part of you because of that.”  Then he went on to say, “I am here for you.”  “I love you.”  “All of you.”

Who doesn’t want to hear that?

People who rely on words of affirmation to feel loved must hear it.

Let me say it again because if you love someone, this is exactly what they want to hear (as long as you mean it, of course).

Turning to her, I anticipated that she might reciprocate with her own endorsement of love for him.  However, her response surprised me.  She seemed skeptical; untrusting of his words.  I asked her to share with him what she was feeling as she listened to him.  “Embarrassed, really,” she said.  “You don’t talk to me like that, and I don’t know what to do with those words.”  She continued, saying, “I feel embarrassed…maybe vulnerable is the word, because this is not how you talk.  It feels unfamiliar, foreign.”

Then she said to him, “And, it surprises me that you feel that way, I had no idea.”

He was noticeably sad at the thought that his wife did not realize how much he loves her.  He said, “I thought my actions let you know how I feel, I didn’t realize you needed words.”  (Actions are generally the love language of “acts of service“). Then without prompting, he continued with, “I think about how grateful I am for you, how much I love you, and how important you are to me all the time.”  And, “I just don’t think to say it to you.”

When your love language is hearing words of affirmation, this means that you feel most loved when you hear someone say loving, kind and appreciative words about you. Words are important, and to gain credibility you must use them regularly enough that they are not unfamiliar to your loved one.  Words are not the only way to show your love.  For some people though, it’s just what they need.  Lucky for her, he seems to get that now.

As the session closed, he turned to her and said, “I understand now that you need to hear it, and I want to give you that.”