Last Sunday was nearly perfect. I’m talking, the kind of day that felt like the universe was handing out free hugs in the form of a sunlit breezy zippety-do-da day.

Except for one thing.

It was early afternoon, and the sky was full of cotton-ball clouds that floated effortlessly against the crystal-clear blue sky. The day was calling us out to play. We hopped in the convertible and headed to the country where the cornfields began and the hustle of life faded into the background.

Days like this are my favorite. We get lost (literally and figuratively) on an adventure to exactly nowhere, and by the end of the day, we’ve been everywhere.

We always make a discovery. That’s the fun part, experiencing something unexpected, except last Sunday our unexpected discovery was anything but fun.

After a beautiful country drive, we stopped for dinner at Rick’s Cafe Boatyard. This popular westside eatery sits on the bank of Eagle Creek, with outdoor seating where the sun kisses you goodnight as it sets over the water.

We pulled into the parking lot just as another car pulled out. Life is good.

There was a 25-minute wait for a table. Not bad. We snapped a quick selfie (see below), then headed toward the water for a short walk. 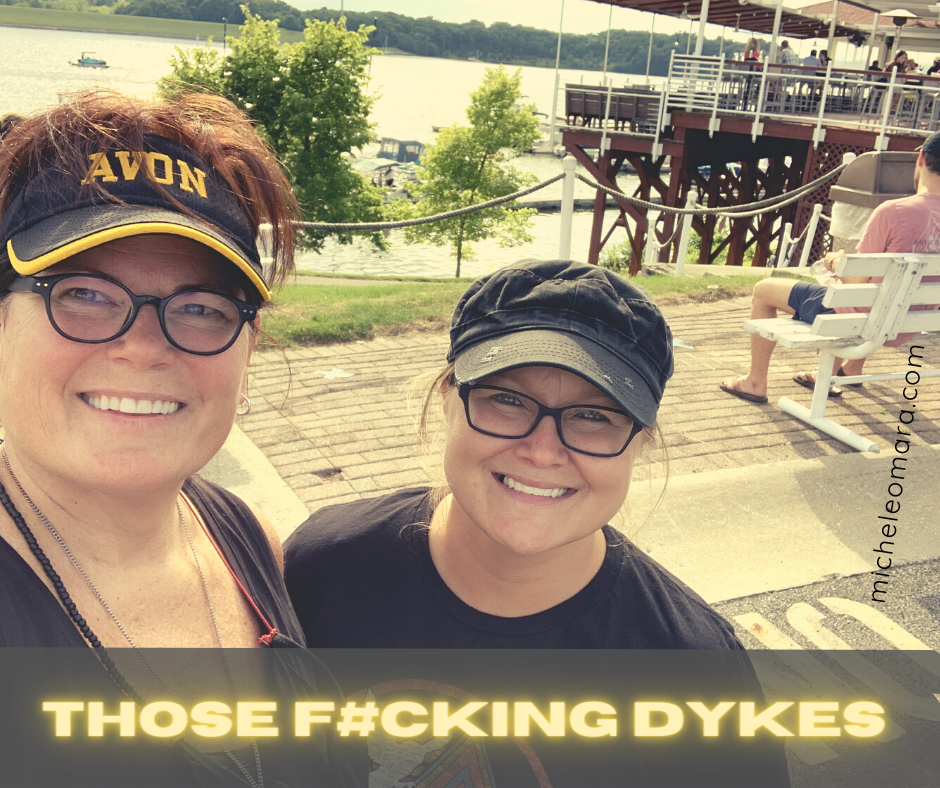 As we started out, we passed a bearded man in jeans and a t-shirt, standing by a motorcycle with his arm around a woman. The woman was leaning against his body with one arm wrapped all the way around his waist and she held a drink in her other hand.

As we walked past the bearded man, he said, loud enough for us and the other’s nearby to hear, “I cannot talk with these f*cking dykes here.”

Shocked at the sound of these unsolicited words piercing my ears, I instinctively turned around and calmly said, “Now, that was pretty rude.” To which he responded, “It’s true, isn’t it?”

Is this really happening?

Seeking to minimize my interaction with him, I said matter-of-factly, “That’s just not nice,” and we kept walking.

With several onlookers who silently surrounded us, he then shouted, “It’s Adam and Eve, not Adam and Steve.” And followed up with, “You should read the bible.” Kristen stopped and turned around to inform him, “I have.” And she continued, “What I learned from the Bible is to not judge. The bible has more scripture about judgment than anything else.”

We started walking again and he continued with his hate-filled slurs. Fed up with the irony of this interaction, Kristen turned and asked him, “Is she your wife?” To which he shouted back, “No.” Then, after a slight delay, he must have registered her suggestion of premarital sex (a Bible-based sin) and he yelled back, “But we are not having sex.”

I think to myself, maybe that’s why he’s so mad.

We walked far enough that he was out of sight. Speechless, we walked silently while we tried to make sense of the toxic exchange that lingered in the air like the smell of a skunk. Eventually, we heard the roar of his motorcycle startup, and as they drove away we exhaled a sigh of relief.

It’s not what he feels about gay people, or even about us specifically, that I find most concerning. I believe he has the right to think and feel anything he wants. What concerns me is the unabashed sense of entitlement he feels that allows him to say to us, and about us, whatever he wants in a hostile, hate-filled way.

There was also an alarming unpredictability to this outburst. We had no eye contact with our harasser, no interaction, no words, nothing. Aside from the quick selfie, we took, (see above) we had no physical contact or public displays of affection to trigger a reaction. Not that it would have justified his behaviors if we had.

I count myself among the lucky to have lived this long without ever having an experience like this. Though it was a first for us, there was nothing special or unique about the harassment we experienced. In fact, it is very mild, compared to what many people go through. This type of harassment creates a feeling of separateness and more specifically, a feeling of less-than-ness, for those being harassed.

These are the kinds of experiences that breed inauthenticity. As if it isn’t difficult enough to find our truth, and to live authentically. As poet e.e. cummings said, “It takes courage to grow up and become who you really are.” Being true to yourself in the face of ridicule and harassment increases the challenge exponentially.

Fortunately, I am good with being a lesbian. Though, I wasn’t always. I imagine if I had had experiences like last Sunday, it would have greatly delayed and further complicated my journey. I do not work to hide my sexual orientation. I mean, I was wearing my visor and no makeup, after all. 😜

When you are publicly singled out as the subject of someone’s uninvited expression of hate, and vitriol, in front of an audience, the message is clear: you are not worthy; I am better than you, and everyone here agrees.

Luckily for us, two of the observers of our harassment did not agree. As we returned from our walk, a man and a woman approached us, expressing their apologies for not speaking up. The man stated that he wanted to say something, but he feared the bearded man had a gun. Wow, I thought to myself, that never crossed my mind.

They got it. They saw it. They understood what happened. And they were angry. Each of them shared with us that they also had a gay adult child. I was grateful for their words and for this interaction. It quickly restored my faith in humanity.

As for the bearded man and his lady, I wish them love. I can think of no better remedy for his behavior. Where there is that much hate, it’s hard to imagine there’s much love.

Everyone makes sense if you have the time and opportunity to understand their whole story. I am sure he has a story and I am sure it makes sense. While I don’t wish to get caught up in the crosshairs of his woundedness again, I do wish him love.

On a brighter note, I am starting my latest 12-week live video online class for Lesbian, Bisexual, Queer and Non-binary folx next week. This is class is Designing My Life Radically Authentic and will start Wednesday, August 26th. For more information, registration is available here.