How many times does the average lesbian couple have sex per week?

This is a question I asked 496 lesbians whom I surveyed in 2011 while working on my dissertation for my PhD in Clinical Sexology.  The topic of my dissertation was lesbian sex and relationship satisfaction.

Lesbians were asked to report how frequently they had had sex within the six months prior to taking the survey.  If they were single, they were asked to reflect on the last six months of the last relationship they were in.  Clearly, self-report is subject to memory and as a therapist who works with lesbian couples on a daily basis, I can attest that self-report varies among lesbian couples when asked, “How often would you say you have sex per week?”  Not surprisingly, the satisfied partner often recalls a higher number of sexual encounters with her partner than the unsatisfied parter.

Here’s the lesbian sex chapter of my dissertation regarding how often lesbian couples are having sex.

However, here’s what was reported by the 496 lesbians surveyed. 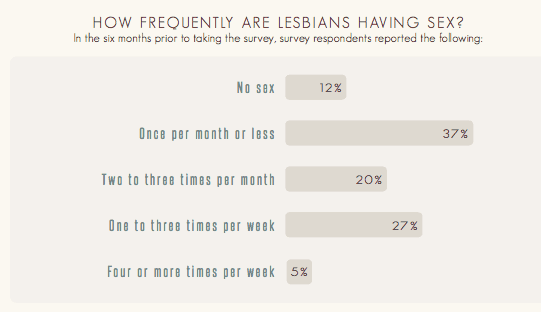 Summary of how often lesbian sex occurs with lesbian couples: