Is this really a thing for lesbian couples?

Where it all started

In 1983, a research study was published by Pepper Schwartz and Phillip Blumstein, that identified lesbian couples as the least sexual couple pairing. This research led to more research which further confirmed that lesbians were not only having less sex than other couples, but they were also experiencing a more rapid and dramatic drop in sexual frequency as their relationships continued (Loulan 1984). Soon, these statistics were broadcast in the media, and just like that, a narrative of lesbians as non-sexual started to coalesce in our culture. And, it still lingers in our collective conscience today.

The three-word phrase that captured the essence of this emerging concept of lesbians having infrequent sexual activity, combined with a rapid decline in sexual frequency in long-term relationships is lesbian bed death (LBD).

Lesbian Bed Death describes a phenomenon in which lesbian couples experience a comparatively lower rate of sexual frequency as well as a rapid decline in sexual frequency the longer they are coupled.

When American Couples was published in 1983, it provided a credible source to describe lesbians as less sexually active than other couple pairs. How they arrived at this conclusion was through a massive study of 12,000 couples, in which Schwartz and Blumstein explored the behaviors of four couple pairings: married, co-habitating (heterosexuals), gay males and lesbian couples. Lesbians were identified as the pairing with the lowest rates of sexual frequency. When I asked Dr. Schwartz if she coined the phrase lesbian bed death in response to their research, she said, “It is attributed to me—people I know say I said it—but I never wrote it. Sadly, I have no memory about it—so I can’t deny or confirm!” 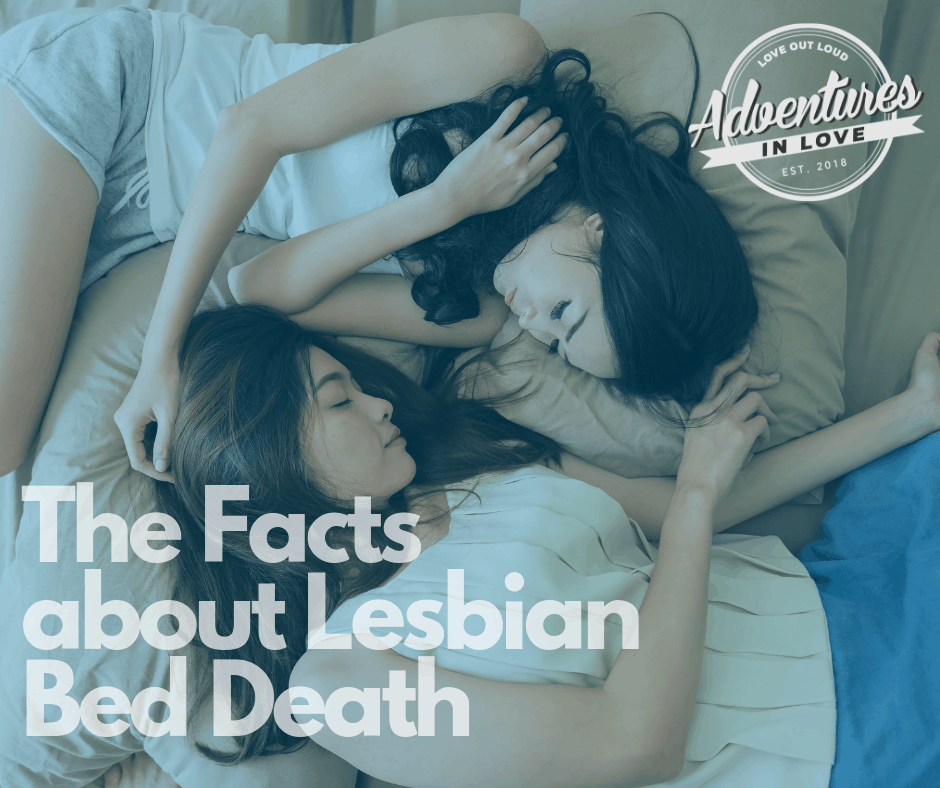 What is lesbian bed death?

When I first heard this term, I thought, “Wait, lesbians are killing their partners in bed?!” Yes, pretty concrete of me, I confess. Fortunately, I was quite wrong. Lesbian bed death has nothing to do with lesbians killing or dying in bed.

Lesbian Bed Death is a strange, but sticky phrase that dates back to the ’80s. While it is not clear when and precisely where or by whom the term was created, there is a long and winding journey (which I traced while working on my Ph.D. dissertation on lesbian sexuality) that reveals the history and development of this phrase.

Admittedly, for some, this part of this article will be too much (boring) information and you may wish to skip to learning how often lesbians report having sex.

Shortly after American Couples was published, Joann Loulan authored Lesbian Sex in 1984. In a conversation with Loulan, she shared with me, “I did not coin the phrase Lesbian Bed Death.” She explained, “I used it frequently, but of course my life was (and is) trying to make that change within the lesbian community and make sex sexy again.”

The last source credited for this phrase, Kate Clinton, also denied creating this unflattering narrative. She did, however, joke that rather than a same-sex relationship, she often joked that lesbians have a “some sex relationship.” Clinton led me to LGBT advocate Sue Hyde and her partner Jade McGleughlin. Sue Hyde thought her partner, Jade McGleughlin, was the one who captured the “entire phenomenon of decreasing lesbian sex activity in long term couples” into the well-known phrase in 1985 or so.

In a conversation with Jade McGleughlin, however, she said she believed the phrase “coalesced spontaneously among a group of lesbians for whom it captured an experience particular to that moment.”

This is consistent with Sue Moir, another lesbian whose name surfaced during my search for the roots of LBD, who said she heard this phrase “at a dyke gabfest in Newton,” and shared it with McGleughlin. McGleughlin was working on a Master’s thesis at the time on the topic of lesbian bed death. While she didn’t coin the phrase, she said she viewed herslf as a messenger. During the 1987 March on Washington for Lesbian and Gay Rights, McGleughlin gave a speech during the Sex and Politics Forum. Sue Moir was there, and Moir said, “I can tell you it was the first time that the audience had heard it [lesbian bed death].”

The timing of McGleughlin’s speech also coincided with the lesbian sexuality research (Schwartz and Blumstein 1983, Loulan 1984, 1987) at the time, which became an accelerant for the spread of the LBD message. Ultimately, Lesbian Bed Death took on a new and unintended meaning that gave shape to lesbian sexuality as inferior, and in some way doomed.

McGleughlin expressed regret about the impact of this phrase. In her opinion, the phrase “collapsed the complexity of lesbian sexuality,” and what might otherwise have been a historical phenomenon became a “condensation” and “condemnation” of lesbian sexuality. Ultimately, it took a village of lesbians to create a shared narrative about the experience of declining sexual activity in lesbian relationships and this message spread like wildfire across the United States.

“It is attributed to me—people I know say I said it—but I never wrote it. Sadly, I have no memory about it—so I can’t deny or confirm!”

“I did not coin the phrase Lesbian Bed Death.” She admitted, “I used it frequently, but of course my life was (and is) trying to make that change within the lesbian community and make sex sexy again.”

Until the 80’s lesbians were judged negatively if they had sex with women. Therefore, as lesbian bed death gained some traction, and the collective conscious shifted, it was an ironic flip of the script when lesbians were being judged for not having enough sex with women. Go figure! Most of the research between the 80’s and 2010 (when I conducted my own research) was consistently reporting lower levels of sexual frequency for lesbians than other couple pairings.

I was also seeing lesbian couples in my private practice who were reporting low levels of sexual activity. Same-sex female couples would report having minimal and sometimes no sexual activity for years. This was a key motivation for my return to school in 2010 to get my PhD in Clinical Sexology. I wanted to understand lesbian sexuality better, therefore, the focus of my research was lesbian sexual frequency and how this affects lesbian relationship satisfaction.

I conducted my research with 498 lesbians. Using a snowball approach to finding lesbians, I started with the large sample of lesbians I knew from providing same-sex couples counseling to females for over a decade. With the help of social media, the initial group of lebians I contacted were able to then reach out to other lesbians across the United States to create a wider-reaching sample. Lesbians from most states were represented, and

This is what I learned:

Sexual Frequency of Lesbians Based on Age

Summary of Sexual Frequency of Lesbians Based on Age

What is important about sexual frequency is whether or not you are happy and satisfied with your sexual relationship with your partner. There is no right amount of sex that anyone “should” be having, regardless of your sexual orientation. Sex is personal, and it plays a different role in the lives of different women. The key is to understand what sex means to you, what sex means to your partner or wife, and to maintain open communication about your respective needs, and how each of you can get your needs met in your relationship.

Michele O’Mara, LCSW, Ph.D. is an expert lesbian relationship coach and psychotherapist with a comfortable obsession with all things related to love and relationships between women. She is particularly fascinated by lesbian couples in blended families, issues of infidelity, lesbian sexuality, and recovery from lesbian breakups. She is the author of Just Ask: 1,000 Questions to Grow Your Relationship, which is available in paperback or Kindle on Amazon, as well as an app on Itunes /Google play. As a side hobby, she operates a quirky site called “AskLesbians.com” where she randomly polls lesbians to satisfy the quirkiest of curiosities. Lastly, she and her wife Kristen host Lesbian Couples Retreats in various destinations, and you can learn more about those at lesbianloveadv.com